October is generally a rather dark month over here, but this year has seen somewhat milder weather and some spectacular sunsets. Today the evening sky was a deep blue ocean full of little golden islets spreading in wavy patterns across the entire sky. I found myself almost falling upwards into the heavens, losing myself in the ocean above.

Released today are two albums that also gracefully drift between the depths of the oceans and the heavens. 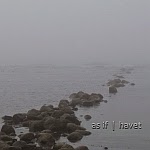 Kenneth Werner returns to gterma with an album inspired by the ocean that surrounds his home island of Bornholm. During our stay we will experience the passing of the seasons in the southern Baltic Sea. Twelve deep tracks hovering in the borderlands between dubtechno and ambient, the zone which we find As If returning to again and again. Album in jewel case with 16-page booklet. 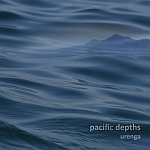 The last time we encountered Urenga we retraced a confused traveller's journey among the distant islands of the West Pacific, searching for the fabled continent of Mu. On Pacifc Depths, we allow ourselves to catch our breaths and sink our tired souls into the deep blue abyss that is the lost history of Urenga itself. The album is made up of a deep ambient current collected from several digital releases that occurred between 2011 and 2013. Album in jewel case with 16-page booklet.
Posted by gterma at 6:14 PM No comments: